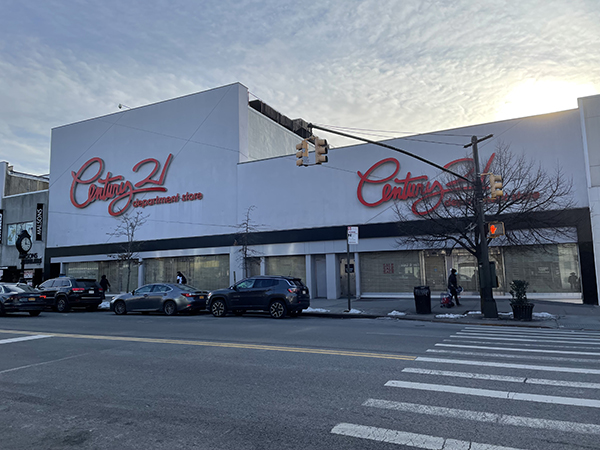 “86th Street has never been the same”

BAY RIDGE — The Century 21 department store on 86th Street closed in December 2020, and more than a year later, the sprawling retail space on one of Brooklyn’s busiest shopping streets remains an empty shell – a symbol of the lingering effect of the COVID-19 pandemic on businesses in the city.

Now the landlord, ASG Equities, is stepping up its efforts to find tenants for the 19,800 square foot site. ASG Equities recently announced the hiring of RIPCO Real Estate to manage the search.

“I hope they will soon find a new store to open there; 86th Street hasn’t been the same since Century 21 closed,” said Eileen Loughlin, a parishioner from St. Anselm’s Church who often shopped there, sometimes after mass, just four blocks away.

The closure of Century 21 was a blow to 86th Street, a shopping strip containing more than 100 stores and boutiques between Fourth Avenue and Fort Hamilton Parkway.

The department store, which was located at 472 86th St. and operated for 60 years, was considered an anchor of the 86th Street Bay Ridge Business Improvement District because it drew shoppers from across Brooklyn and provided foot traffic other stores nearby.

“People who went to Century 21 also grabbed something to eat at the local restaurant or went to other stores along the corridor. So Century’s absence had a triple effect on other businesses,” said Josephine Beckmann, district manager of Brooklyn Community Board 10.

The department store was an economic engine for reasons other than the shoppers it attracted. “They employed a lot of people from here, in the neighborhood. You could walk a few blocks and have a job,” Loughlin said.

Century 21 was one of nearly 6,000 New York City businesses that closed in 2020 due to lost revenue caused by the pandemic. The Partnership for New York City, a business group, has estimated that at least a third of businesses that have closed due to COVID will never reopen.

According to a 2020 year-end report from the Brooklyn Chamber of Commerce, even businesses that have managed to stay afloat have suffered significant pandemic-related financial losses. Eighty percent of businesses in the borough lost revenue; 74% had fewer customers than before the pandemic and 51% increased their debt in 2020.

Beckmann said the landlords’ efforts to find new tenants for the Century 21 property are a sign of hope.

“I very often hear from residents who are worried about 86th Street. But I’m optimistic that we’ll have a variety of new businesses that will fill that void,” she said.

Dan Texeira, a St. Anselm parishioner who serves as president of Third Avenue Merchants in Bay Ridge, said he hopes new tenants will be found soon. “You have to fill those showcases,” he said.

Texeira believes the Century 21 property, which occupied several storefronts, will be subdivided and then leased to smaller retailers.

“I don’t see a big box store coming over there. How much can you pay in rent? Times are still tough,” he said.

Ways to make sustainable fashion the true MVP of your wardrobe

Apple updates AirTags to prevent people from being tracked

Your Google searches are slowly evolving. Here is the continuation

Why booking a trip on your phone is a bad idea