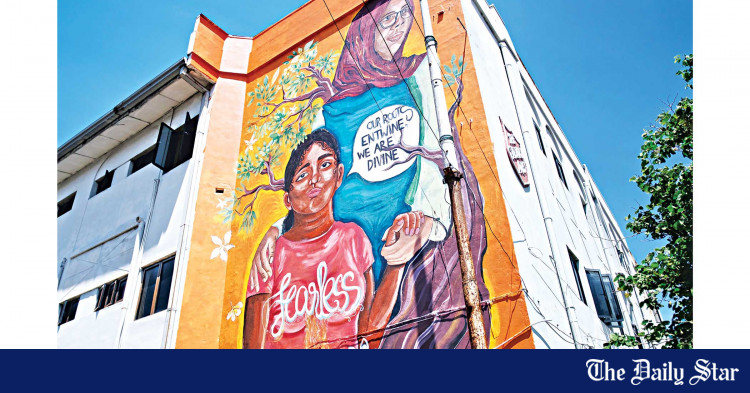 The Fearless Collective: memory of an artist in Sri Lanka in the midst of an economic crisis

A few years ago I was on the phone looking for art residencies where I could learn how to paint large scale murals. It was a dream of mine to create them one day, as I myself was a budding self-taught artist with a penchant for street art. And maybe one day find Dhaka enhanced by art, color and voice amid the chaos.

I believe in the healing power of beauty and art. I discovered how making art a new hobby has helped my personal growth and I have witnessed examples throughout history and the modern era of how art can enhance the community life.

For all the latest news, follow the Daily Star’s Google News channel.

Ever since I got into painting, I had a passion for wall art and street art as a form of public art installation. I have seen all over the world and read a lot in different economic contexts how the presence of street art has a positive impact on the well-being and productivity of a community. For example, Medellin in Colombia, a city torn apart by the legacy of drug lord Pablo Escobar, has been decorated with public art to improve community reintegration, morale, and attract tourists and businesses, and it has worked with success among many other examples around the world. .

My research led me to the incredible work of The Fearless Collective, a participatory storytelling movement involving large, beautiful community murals. The murals were created in collaboration with the marginalized communities the murals represent, in strong and empowering narratives. Led by artist Shilo Shiv Suleman, Fearless had a vision to extend its methodology to South Asia. An art residency was to be conducted, and I immediately applied. With my passion and passion for murals to represent vulnerable communities, and my general interest in street art, I immediately aligned with the Collective.

However, the COVID-19 outbreak began soon after, and despite several bonding moments during Zoom calls, the residency was postponed indefinitely. Two years later, we finally got a call asking who was still interested, and I found my way from Sri Lanka to join a magical cohort of other strong, pioneering female artists from India, Pakistan and the Sri Lanka, with me representing Bangladesh.

Even though I’ve never been to another art residency, I immediately felt, along with the other artists, that it was going to be 10 extraordinary days. Over the next few days, we began to unpack each other, and the stories we were incarnating separately. For the first three days, the nine female artists from across South Asia shared our personal and political stories, where we come from and the movements we find ourselves in. We talked about fears and resistance movements in our countries.

What was special was not just sharing our personal and political vulnerabilities, but how we lived the shared experience of learning to transmute fear into beauty. After the workshop, we sat down and channeled our findings into creating self-portraits using the Fearless 6-step methodology.

This was the first step in bringing the methodology to the community; by first integrating with ourselves and our individual artistic expression.

We continued the workshop with the two communities we were going to work with as two distinct groups, namely the Sisterhood initiative and the We Are From Here project, an initiative aimed at bringing together the diverse diaspora community and elements unique architectural features in Slave Island, Colombo, on the non-literal map. As I was working with the We Are From Here project with a resident artist from the community and a Pakistani artist-activist, we designed our workshop accordingly.

The goal was to reach out to community members’ stories of empowerment and integrate them with their sufferings that mattered in the larger scheme and the diverse stories they collected. We visited and walked through the community before the workshop to get a better idea of ​​their life. Slave Island looked almost like a slum or was treated that way. But it was woven with diaspora stories from diverse religious backgrounds and experiences of working as remittance workers in the Middle East.

I also met a Bangladeshi family there. As Leena, the Pakistani artist, and I were foreigners while Vicky, the Sri Lankan resident artist, was from the Slave Island community, we sought to integrate our external and internal perspectives. We formulated the questions: what have we lost and what have we found?

The next morning we set up our ritual space, a beautifully decorated physical space matured for the act of unfolding and fully healing. We designed our ritual with soil from Slave Island as a grounding element that connected everyone. Community members, one by one, grabbed a handful of soil and shared what they had lost. Many of them were migrant workers who had lost family members or were bearing the financial burden of learning to fend for themselves and their families, even husbands.

The ritual spaces offer magic and beauty that create comfort and fluidity. They spoke of their grief, of the people and homes they lost that cling to the ground of the space that grounded them. They internalized this through ritual. As Slave Island rapidly changed and gentrified, many of them risked losing the spaces they had just called home and the community they had built. When asked what they found, they all talked about building their own financial independence and finding themselves in the community.

The ritual ended when everyone looked at themselves in a mirror and affirmed “I have found strength in myself and in the community” and ritually anointed themselves by refreshing themselves in rose water. as a healing entity. They rewrote their stories of hardship in strength.

We shared together, cried together and created an image representing their faces and the elements that rebuilt their lives.

The image was crafted so that while acknowledging the struggles women faced, the narrative was strong with the stories of their strength. Many of them had used their sewing or cooking skills to bail themselves out of bankruptcy among other life crises.

The following days were spent countless hours of painting. Remember that Sri Lanka was now at the height of its economic crisis. The entire island was swept by deep economic problems, fuel and power shortages, among others, while strong protests unfolded across Colombo as well as other major cities. We painted almost continuously through it all, including the rain and one day a nationwide state of emergency was declared.

It was the first time most of us had painted a mural of this scale. Cranes and scaffolding were used for the first time. The mural now stands at the 30ft x 40ft rear of the Rio Cinema Hall in Colombo, Sri Lanka. All four artists worked hard and through rain, protests and power cuts to make it happen, including Shilo Shiv Suleyman, our mentor, who guided us through the uniqueness of painting on such a large scale.

In the end, the mural was made, not just by the artists, but by the whole community. Everyone participated in the painting process together. Children climbed ladders and chairs to put their mark, while their mothers helped to climb the crane or the ground, some during the Ramadan fast, to erect the mural that now stands as a monument in honor of the tenacity and resilience of the Women of Slave Island. They had been involved in rewriting their narrative as well as building the monumental mural that would withstand rain and weather for years to come, at a time when the nation was torn apart by crisis.

The success of being able to erect this mural as a self-taught mural artist has really intensified the thirst in me to see more street art in Dhaka. I saw the joy and power he immediately brought to the community, and I can’t wait to share it in Dhaka and beyond. I see with optimism that wall arts are more appreciated in Bangladesh, especially in the restaurant industry, but I hope to see the City Corporation and other government agencies use art form and deshi artists to inspire the moral and good civic sense. I also urge cultural organizations and donors to accept applications from fervent young Bangladeshi artists to develop street art in Dhaka.

Isn’t it time to find new ways to add color to our city? Don’t our people deserve beauty, smiles and a little moral boost or a place to take a picture because they are proud of the art in their city. Let’s make this happen collectively.